Results/retrospective for the March 2017 sprint.

The March 2017 sprint ended on Tuesday, March 28, a few days ahead of schedule, producing the Lucee 5.1.3 release (5.1.3.18)! For those keeping score, so far in 2017 we’re at 3 completed sprints, 3 Lucee releases, and 3 retrospectives. We have a lot more work to do, to be sure, but the development team’s productivity is gaining momentum each month. There’s a lot to cover, so let’s get started.

First, we’re still in a push to get as much of the community on 5.x as possible. As a reminder, if there’s a problem/ticket that’s blocking you from upgrading to Lucee 5, please let us know ASAP here in the forum, and we’ll try to put top priority on those tickets (which is something we’ve been doing since February, actually).

Sprint Planning The March 2017 Sprint is now underway and which will produce Lucee 5.1.3. March 2017 Sprint Backlog (as at 2017/03/18) [image] https://luceeserver.atlassian.net/issues/?filter=11800 Current development focus is addressing blockers for teams moving to Lucee 5.x. If you are planning an upgrade and are stuck on a specific issue please let us know and we’ll see what can be done to schedule it in the next Sprint Backlog. Last Sprint… https://dev.lucee.org/t/february-2017-sprint/…

Here are the summary details for the March sprint:

The result of the March sprint is the latest stable production release of Lucee: 5.1.3 (5.1.3.18), which can be downloaded from the Lucee downloads page.

Tickets included in this release are here: 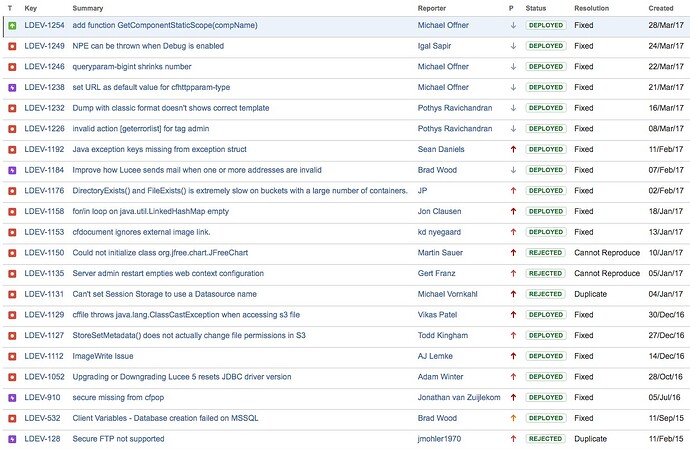 By the way, Adam Cameron and a few others from the community have rightly pointed out that we’re not yet publishing proper release notes, but rather just linking to the list of tickets in each completed sprint. We do plan to begin creating formal release notes later this year. Consider it added to the PM’s to-do list!

Next, we’re just getting started on the April 2017 sprint, which will produce Lucee 5.1.4. We’ll publish that sprint plan later this week.

Finally, we’re also considering releasing Lucee 5.2 after either the April or May sprints. This will include enhanced administrator features. More on this as the April sprint unfolds.

Thanks for listening, and thanks as always for your interest in Lucee. Looking forward to getting everyone running on Lucee 5!

We are on Current version: 5.1.3.18-SNAPSHOT which shows as the latest snapshot available.

When selecting Releases in the admin Updates section it does list the 5.1.3.18 release you mention here as an upgrade to the current snapshot and lists LDEV-1254 as one of the items implemented.

@Leftbower - Did you install the SNAPSHOT via the preview provider or manually at some point? You can switch it back to the stable channel and update if you like, but if they have the same version number they will have exactly the same code base.

Hi @Leftbower. It would appear that you upgraded to the 5.1.3.18-SNAPSHOT release at some point, which is why that’s showing as your current version. As it happens, 5.1.3.18-SNAPSHOT and 5.1.3.18 are really the same release. We just trim the -SNAPSHOT off of version name when we’re ready to do a final release version. So, yes, you can upgrade to the 5.1.3.18 release, but in effect you’re already on that version.

I installed via the Lucee admin. I guess my overall question is if it’s to
be expected that a stable release and a snapshot release, that both use the
same release numbers, would differ? (e.g. the LDEV-1254 referenced earlier)

No, if they have the same number they will have exactly the same code base.

OK, thanks all. It was just the appearance of some difference in the two from the admin page that threw me:

It would be excellent if the April release could include a very broken function of Lucee, the mappings for web interface just simply dont work, all mappings must be made in the admin. Here is the ticket: LDEV-1197

Hi Patrick. Good news–1197 has been added to the April sprint! Thanks for the input.

Hi Patrick & other sprinters!
I commented 2 sprints ago about my hopes for a prosperous continuation of the Lucee sprint process. And hey, three times in a row! Awesome! I love the way how the dev process has matured. Congrats to all involved, and keep up the good work

Hey, thanks for the comments @Julian_Halliwell and @frinky. Much appreciated. We’re busting our humps for the community! More of that to come. Thanks again.