I’m seeing a weird behavior when using the SUM(money) function in a queryExecute() call where the result returns 0, which is incorrect. When I run the exact same query (that pull from the sql statement in a cfdump) in MS SQL Management Studio, I get the correct result. The field being summed is mssql type money.

Does anyone know how I can inspect the sql that is passed through the jdbc driver? I couldn’t figure out how to do this in MS SQL SMS, nor could I find any setting in the jdbc driver settings in Lucee. And I’m not sure how I would put together a reproduceable.

Though I am not using QoQ for this query, I noticed this thread in these discussion having to do with QoQ, which looks suspect:

Odd, did you try casting the result to a string in the query? That would bypass any jdbc / lucee oddity

Same result when I cast the sum it as a string:

I think if there’s a null in the data, zero is expected?
I assume this
... = sf.subscriptionFK
means this is a sub-query / partial snippet.

This doesn’t feel like a Lucee issue to me based on the SQL you posted but you’re saying the exact same SQL works via SSMS? Very weird.

No, for similar needs a quick/ dirty way to see what was passed is to look via activity monitor via SSMS (or write SQL used to a log file). Better is using Fusion Reactor.

Query Listeners may be an option for you too.

A query listener is a hook which can be configured to run before and after a query is executed.

Thanks @Phillyun - yes it is a subquery.

The query listener is interesting, but yielded nothing as far as I could tell. The query is exactly the same before and after, so I’m not seeing any manipulation going on, nor would I expect to. I assume my query ends up being executed exactly as I wrote it, but maybe @Zackster would have more info on that.

There are no null values being returned from the subquery, in fact I’ve tested the subquery and can see (as I expect based on my test data) that there’s only 1 record being summed.

I’m almost certain there’s an issue with the query joins.
I believe if you pass in your subscriptionFK for your use-case, you’ll have 1 record but the count(*) as num will show zero records.

Otherwise I would still take a closer look at the full query, not just the sub-query.

Every test I’ve done ends up with consistent results (blank when null for count of zero and expected sum when count is > 0 ): 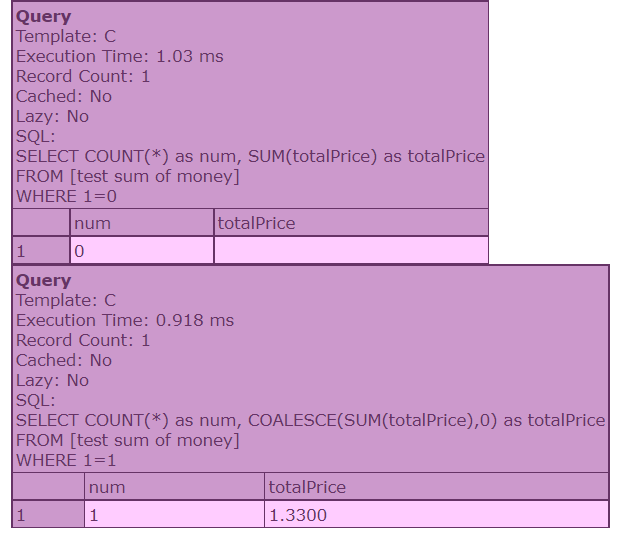 The metadata of the returned result remains unchanged in either case 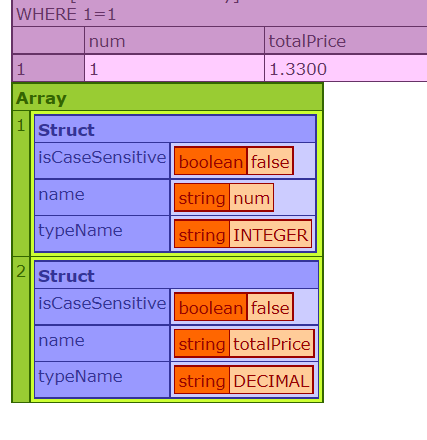 If that doesn’t help narrow it down, please post a reproduction case.
Something that includes both the TEST DATA and CFML would be ideal along with the versions you see the different behavior on.

I get 1 record with the total price of 10 when I run the subquery directly in management studio, and I get the same result in Lucee. It only calculates incorrectly when run in the full query. I guess I’ll have to build some test data for this.

Here’s the subquery with a little more context (still just a partial query):

After spending a few hours putting together some test data and being unable to replicate the issue, I finally realized that the calculated sum that I named totalSpent is also a field in the sf table, which is no longer being used.

Many thanks for helping me focus on this and I really appreciated your time! I wonder if I can delete this thread.

What’s interesting to me, and what I learned from this is that mssql didn’t complain about a query with identical column names (I didn’t know you could do this), nor did CFML. I didn’t visually see it in mssql management studio bc the columns were far enough apart, and CFML just overwrote one of them.

Yeah, that’s how it works even though it doesn’t make a lot of sense. A CFML query object can have more than one column with the same name, but if you run a QoQ against it, I think the column it selects from will just be the first one it finds with that name, and if you select out the same column twice, it will ignore subsequent definitions of the column.

What’s ironic about this is I can’t run any quick tests about this on tryCF, because queryNew() won’t allow me to create a query object with the same name twice, even though CFQuery will if I’m selecting via JDBC