I’m analyzing a heapdump because of a memory problem on one of my servers. The memory is largely used by a query in the session scope, although the query is just a few record. What strikes me is every query contains a very large ArrayInt (1.048.576 items).

When investigating further it seems every query in memory has the same ArrayInt with exactly the same number of items. What are your opions on this? Is it a bug? 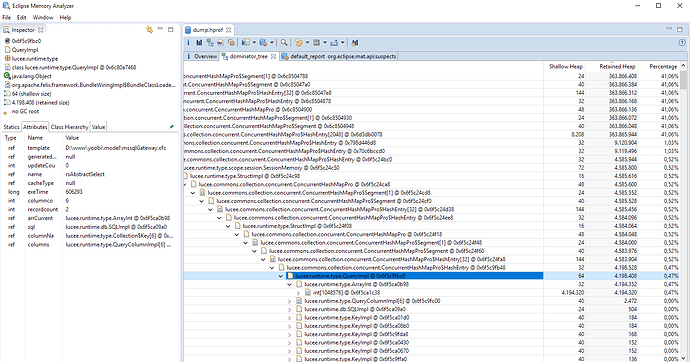 can you provide a test case?

what does the (experimental) sizeOf function say about the query object?

this function is experimental, do not use in a production environment. this function returns the size in bytes of a given object.

Working on a testcase. Thought it would be simple, but until now I’m, not able to reproduce the issue in a simple testcase

Although I’m not able to reproduce this in a testcase the issue is still occuring in my application (coldbox framework). Somehow the arrCurrentRow (ArrayInt) attribute of the lucee.runtime.type.QueryImpl object Is getting larger over time. 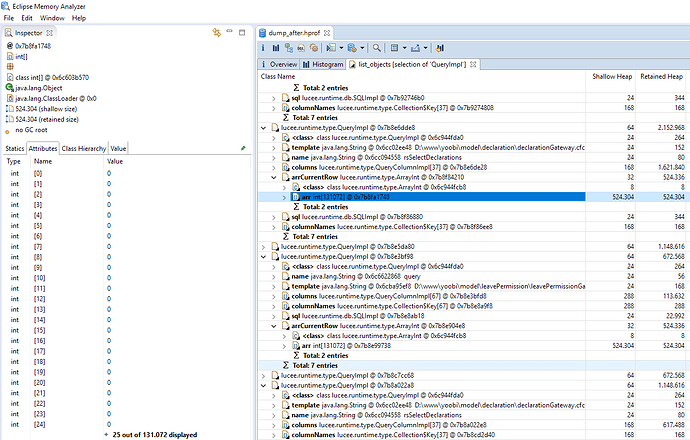 Off the top of my head, here some things to look at/try.
Can you try the jTDS driver?
Do you have a huge return result (as in record number not size)?
Query cache setting?
[Edit]
Can you try 5.2.7?

If I’m reading the source correctly:

So if the context starts at 1, and keeps growing everytime you have a request… every query from that point forward will allocate LARGE arrayints.

blah.COL <- creates a arrCurrentRow with 32 entries (minimum) and saves the current index at index 10 (31 empty entries)

The longer time goes on, the more inefficient it’ll get.

Your best bet at reproducing it is to burn through PageContexts as quickly as possible. (Maybe cfhttp against a lucee .cfm file 100 times, then allocate a new query and see how big the arrayint is)

I imagine this should be hash based instead of array based, or PageContext should be extended to hold arbitrary context information for tags running on a page. At the very least the object should perform well when the query is used in a single pagecontext, as using it from multiple is probably the more rare case.

As compared to CF11, which has a protected int pos in the QueryTable object - which is not thread specific. (but performant and less complex)

@joe.gooch Thanks, that was a good read! Explains some of the behaviour I have seen. Try to build a new testcase based on your suggestion.

Unfortunately this problem is still occuring on production, while not being able to reproduce with a testcase

After a few days I really need to restart the servers. GC will go crazy because every query will have an arCurrentrow with a few million items.

Maybe someone with the Lucee team has an idea what’s going on?

Thanks you! I’m currently enjoying met holiday in Spain, so wasnt able to do this myself. Will add some extra info to the ticket.

the analyze from @joe.gooch is very accurate.

what is important to point out that Lucee has a pool for PCs, so the size is not growing for every request, only in case you have multiple request at the same time (including cfthreads what get it’s own PC).

When this implemenation was written (a long time ago) the id was not a static id, is was more like the stack size of the current running threads, a value of course not growing over time. so when the implementation of PC.id changed we have forgotten that query is depending on a low number. a typical example of using a unindential side effect on a system (always expecting low number).

So why is an array used in the first place and not a map?
Speed, we needed a solution that is as fast as possible and a native array was the fastest one

How can we fix this?

further work on this will only be documented in the ticket…