By default the API accepts POST requests where arguments are sent raw in the body of the HTTP request as a single string of key/values separated by an amphersand, ie.

This works fine in ACF but when moving to Lucee, the second argument is not set.

If I modify the request to a single field, field1=apple only I get field1 which contains apple

So the issue appears to be the ampersand - I have tried different escaping such as %26 or & but neither works.

This behaviour is consistent across 2 different servers, so I’m thinking that I’m missing a setting in Lucee admin somewhere?

Thanks for any thoughts on this?

Hi @Zackster, thanks for your reply.

I am testing directly via Postman at the moment rather than using a browser - is that helpful? 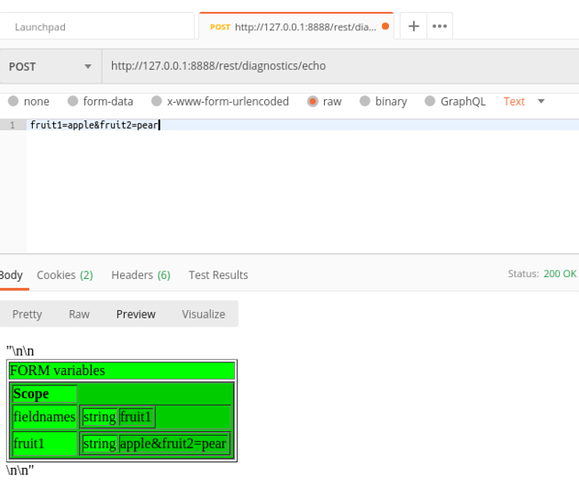 For completeness, it turned out that Postman was the culprit. The server to server calls I tried as an alternative resulted in the correct number of FORM key value pairs, while Postman presented them as a single string.