Announcing a new monthly release schedule for Lucee in 2017.

Ok, be honest–did you know Lucee even had a Product Manager? Don’t feel bad–I’m still getting used to the idea myself, and I’m the PM! My name is Patrick Quinn (@IamSigmund) , and some people in the CFML world know me, but I’m not sure if those 3 people will read this post.

All kidding aside, I wanted to introduce myself and share an important announcment about Lucee. I’m the Co-Founder, CEO and CTO of Webapper Services, and I’ve been in the CFML community since 1999, and spent some time working at Allaire Corporation prior to working at Webapper the past 16 years (!!).

The 4th quarter of 2016 was an especially productive one for Lucee and LAS. We held our General Assembly (annual meeting), elected a new management board that’s now meeting monthly, and expanded both LAS membership and the development team. And yes, along the way, we decided it was time for a formal Product Manager role for Lucee, and yours truly was elected by his peers at LAS in October. It’s the most exciting development in my career since being hired at Allaire.

But we’re here to talk about Lucee, not me. In general, we’re going to be communicating a lot more in 2017 and beyond (e.g., there’s a new management board member in charge of marketing/communication), but let’s get right to some big news: We’re geeked to announce that we’re planning to ship 10 releases of Lucee in 2017!

Here’s a link to the first two sprint plans for January and February, along with some additional information about the new release schedule. Feel free to comment here, but Discourse is where all sprint-/release-related discussion will happen. Thanks for your time, and I’m really looking forward improving Lucee as much as possible in 2017.

Greetings and Happy New Year 2017 from team Lucee. I'm the Lucee Product Manager, and as I mentioned in a blog post today, we're geeked to announce a new release schedule for Lucee in 2017. We've been doing sprint planning for the past couple of months, and the January sprint is underway, and February is planned as well. Our goal is to ship 10 releases of Lucee in 2017, so it's mostly a "monthly" schedule, but only 10 vs. 12 releases, in order to allow time for things like conferences/road shows… 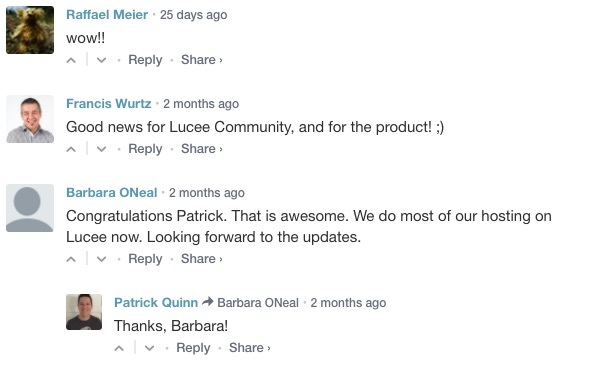