I’m upgrading a bunch of servers with our app. These are at different customer sites. All run Windows. The upgrades are from Windows 2008 to Windows 2016.

Many times Lucee installs with no problems. But I sometimes get a 404.17.

IIS is installed by the customer along with Windows. We then create a site in IIS and install our app. Our site is the only site running. We install Lucee. The welcome page appears. The admin pages appear. However, when try to access a CF page we get:

HTTP Error 404.17 - Not Found
The requested content appears to be script and will not be served by the static file handler.

Most likely causes:
•The request matched a wildcard mime map. The request is mapped to the static file handler. If there were different pre-conditions, the request will map to a different handler.

Things you can try:
•If you want to serve this content as a static file, add an explicit MIME map.

As I mentioned, many installs go smoothly. But I’ve seen this behavior on a couple of times before. I think the way we fixed it was to reinstall IIS and Lucee a number of times and it eventually worked.

Maybe there is something different about the way Windows and/or IIS are installed by our customers that causes this?

Found the problem. .NET 3.5 or newer must be installed. Then the IIS application pool for the site must be set to integrated. 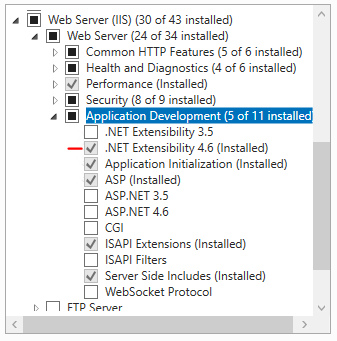 It is good news you found the problem. Thanks for sharing.

@Bill_Foresman can you describe a little bit more about your issue?

The requested content appears to be script and will not be served by the static file handler.

And here is an old Tutorial, but it still describes a lot about it.

Hmmm I see. That is very sad. Well, I’ve installed Railo on Win 2008 at that time several times, but at that time there wasn’t an installer available at all. With 2012 also, no issues. I had problems once with boncode installation, but only once. The installer got always better over time. Still have no experience with Win2016, but a friend of mine (who by the way had no server installation experience at all) got an virtual server, downloaded the installer and installed it on the fly. He said it was sooo easy, just clicking and finished. Of course, it depends what you want to set up, but usually it works out of the box. I know there have been issues once in a while with some installer builds. But not of an big issue. Going to take a look with virtual box and Win2016 eval and try it out, just to check.

I’ve installed Lucee on a number of Windows 2016 servers. Sometimes it goes smoothly and sometimes the 404.17 error appears. In these situations, we do not install the OS. Our clients do and then we install Lucee.

Some things I’ve noticed that cause 404.17 are above. .Net Framework 3.5 must be installed. Application pool must be set to integrated.

Net Framework 3.5 must be installed. Application pool must be set to integrated.

Ok, that is boncode related and prerequisites for the installation. As I mentioned, I had boncode issues once, but as it turned out that was some type of issues related to the hosters virtual server software and some strange security issues set by the hoster. I can even remember that I wasn’t able to install a simple IIS FTP server on that virtual host on Win2012, because it required a MS-Patch that the virtual server vendor didn’t “certify” as an allowed patch to install. The patch installation was blocked even with full admin rights on the win box. That was why I didn’t like virtual servers at that time at all. When I did it on my own server hardware, it all worked like a charm.

after this amount of time with what I would refer to as “out of the box” windows servers, it’s VERY frustrating to have to do this every time on new installs. Especially, when the software claims a successful installation.

at least I have something to investigate to correct the installation and have a production environment. Thanx

FWIW, we regularly install Lucee on “out of the box” servers with no issues. It sounds like a bit of bad luck.

I’m sorry that is happening to you!

Very willing to help get it up and running with you though.