Like voting in Chicago (#BornAndRaised), we like to ship Lucee early and often… so here’s another final release! 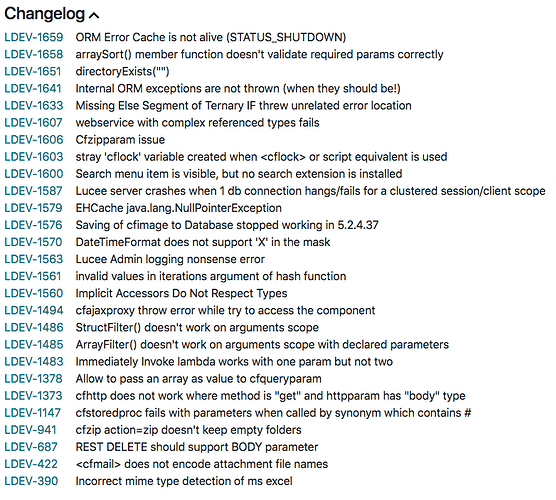 There were no regressions reported during the February release candidate period, which is always good news, as we know we have a larger number of people deploying Lucee RCs quickly for testing. That’s a good sign of the ever-increasing stability and maturity of the codebase, but we always want more testers, so please do get in touch with us if you can help with testing during RC periods.

Next, the March sprint is underway, and it will produce Lucee 5.2.7-RC. We’ve got plenty of room for more tickets during March, so please let us know which favorite ticket(s) of yours you’d like us to tackle! So far in 2018, our staggering of release candidates and final releases looks to have improved productivity, as our rate of closing tickets has increased through the first couple of months.

Here’s to more of that!

Finally, another benefit of the better-focused development schedule in 2018 is more time to spend on “roadmap development”–new minor versions in particular. To this end, we’re prepping a beta release of 5.3!

At present our goal is to deliver that to the community in April. That said, we want to improve the way we support beta releases with better documentation, so we’re going to take our time to make sure the beta release (and docs) are as good as possible.

As always, thanks for listening, and thanks so much for your interest in Lucee!

The Docker images are good to go too

Lucee on Tomcat 8.x with NGINX

CommandBox Lucee servers are also published to ForgeBox for 5.2.6.59

Given there’s a major breaking change in this stable release which accidentally slipped thru
the release process, and doesn’t even show up in the changelog, is a new release required?

Seem it wasn’t, I just downgraded my dev environment to 5.2.6.59-RC and without “Buffer Tag Body Output” being set it fails the docs currently say bufferoutput=true only works when output=false which is confusing as output=true no longer works OOTB without bufferoutput=true, which is only available server/context wide? http://docs.lucee.org/reference/tags/function.html

we will address this asap, please stay tuned.

there is a new snapshot available reverting the change
http://download.lucee.org/?type=snapshots

5.3 will not revert that change

but what about a stable release?

Hi Zac. The 5.2.6.60-SNAPSHOT can be considered a stable release. The reversion was a single-change build, reverting the problem behavior, on what was previously a final release (5.2.6.59), which was a release candidate for a month.

I have updated ForgeBox to have the new 5.2.6.60-SNAPSHOT release, but I renamed it ot be 5.2.6.60 since CommandBox won’t install non-stable releases by default.

tracking down such problems wastes developers time, i wasted three hours myself identifying that problem

Just throwing it out there that we noticed a small (I think?) issue with the fix in #1549, I have added a note to it already.

Hey Zac. Sorry, I misunderstood your original question. I thought you were asking about getting a stable release for your own use, vs. for the community at large. Our first goal, of course, was to get a patch release out ASAP to whoever was affected. But you’re correct that we need to circle back and clean up the 5.2.6 branch so that nobody gets bit with the pre-patch version. We’re doing that now.

Hey @JF_Robichaud. As you probably saw by now, 1549 has been fixed as of the 5.2.7.7 snapshot. You can grab and test now if you like, or, wait until the RC comes out after the end of the March sprint.

Yes I did, when I tested I found that it only partially fixed the issue.

That’s why I added a note afterward - https://luceeserver.atlassian.net/browse/LDEV-1549

Edit: I don’t think there is a way for us to “reopen” issues once it’s marked as deployed.

Ah, sorry, I missed your last comment on the ticket. Yep, looks like we may have missed a test case there (no-content file). I’ve pinged the dev team to review.