I used this helpful guide to get started parsing XML with SAX https://docs.lucee.org/guides/cookbooks/xmlFast&Easy.html

I need to parse a large XML document, so I’d like to be able to stop parsing part way through. Using Abort doesn’t seem to work.

The workaround suggested on some java sites is to throw a SAXException, which I’m having trouble doing. I tried creating a SAXError and throwing it, but I’m doing something wrong. Any help would be appreciated. Please see code below…

I don’t quite understand why you’re creating Java objects direct and not just using XMLParse() but throwing an exception from your code isn’t going to do anything at all. Presumably the XML parsing is a synchronous (blocking) operation, so your exception isn’t going run until after the flow control has returned to your thread. If you want to be able to stop the parsing, you’d need to start it in a separate thread and then “interrupt” the thread that’s doing the parsing. That, of course, assumes that the library in question is interruptible.

Thanks. I’m using the SAX library per this tutorial: https://docs.lucee.org/guides/cookbooks/xmlFast&Easy.html instead of xmlParse because it seems more efficient when dealing with large files.

My cursory understanding is that SAX is an event based parser that doesn’t require you read the entire file into memory. Instead, as the file is read, events are triggered which are hooked to callbacks (see the constructor).

Here’s a java discussion of it: https://stackoverflow.com/questions/1345293/how-to-stop-parsing-xml-document-with-sax-at-any-time

In that example, they throw an exception based on some condition in the startElement callback (which is called right before a new XML node is parts, afaict). I’d like to do the same thing in CF, throw a SAX exception, but I’m not sure I’m doing it right.

Am i way off base?

Ahh, interesting-- I’ve never used the SAX listener stuff. I’m not sure how the exception works-- I’m guessing the SAX library catches that specific exception class. I don’t think there is a way to throw a specific Java exception in CFML, but to be honest, I’ve never tried. What happens when you throw your exception that you showed above? Does it stop the parsing? Create any logs?

I just don’t really what I’m doing when it comes to java, so I don’t know if i’m just not creating the object correctly or what.

Anyway, it’s kind of an arcane issue that I should stop worrying about on a saturday night (tho when in quarantine, what else am i supposed to do!)

thanks for the help. stay safe! stay sane!

It would appear that method in the Lucee code only accepts a SAXParseException and not a SAXException.

I’m not sure what methods are getting called in which order since you didn’t include the stack trace. It does appear that Lucee is just following the Java interface defined for a SAX listener.

You could try generating and throwing a SAXParseException instead, but to be honest I’m just sort of guessing at this point

good catch. tried and failed. The error seems to get thrown right away, when the object is created. It does occur in the flow of the parser (the image shows the loop counter dumps with the error in the middle of them), but doesn’t stop the parser. Thanks for you help. I’m going to take a different route. 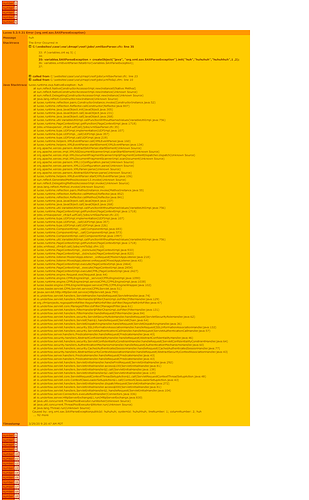