Today I’m sharing the official 2018 release schedule for Lucee. We had a very busy release schedule in 2017, especially considering it was our first year of formal sprint planning and regular releases, and we learned some things from all of that activity.

For 2018, we’re going to re-organize the release schedule so that we have more time for:

Here’s a rough sketch of what the new schedule will look like: 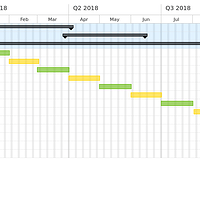 In short, we’ll essentially have two different kinds of sprints now. “Green” sprints will produce Release Candidates. “Yellow” sprints will produce final releases. During a yellow sprint, an RC is “in the wild” (having been released following the preceding green sprint), and we’re also planning the next sprint, responding to RC regressions, working on alpha/beta/roadmap releases, etc.

(Note: Ignore those black alpha/beta phases in the graphic for now; they’re only placeholders.)

In 2017, these phases were generally happening in parallel, vs. serial, timeframes. For example: During a sprint, we were planning the next sprint. Or, during an RC period, we in the next sprint, and, also planning the subsequent sprint. The new schedule will help us focus more on each type of release (an RC vs. a final), and will also allow for better planning, responsiveness, etc. (as noted in the bullet points above).

We’re already underway with this schedule, with Lucee 5.2.6-RC being released today. Please feel free to share any and all questions/comments/commentary.

Happy Monday, Lucee-verse. [image] Seems like a good day to ship some software! Following the January 2018 “green” sprint, we posted Lucee 5.2.6-RC (5.2.6.59-RC) today. http://download.lucee.org/?type=abc Altogether, we addressed 33 tickets during this sprint, 3 of which (LDEV-1428, LDEV-1454, LDEV-1463) were not completed due to needing more detail, so if you were following one of those three, go review the ticket(s) to see where things stand. In general, we continued with several improve…

I have joined Lucee group recently. It is really good to hear about the progress and I will be able to increase my knowledge on Lucee.

Welcome Animesh! Great to have you here.

Thank you Sigmund. In my spare time I promote cfm around the world