I find myself playing with regex this week. I noticed that the engines in Lucee and ACF, for that matter, are using the Apache Jakarta ORO project. This project was retired in 2010-09-01, almost 7 years ago.

Are there any plans on moving to a more modern regex engine or even exposing the java regex system? Maybe we could introduce some replacement functions or have a switch to use one engine over the other.

Having look-behinds would be a nice addition.

This is something I would be curious about as well. While I’m very experienced with regex I have to be honest that I have not educated myself very thoroughly on the pros / cons of the different engines out there.

Do you know which engines you feel would be good replacement candidates and why? If there is a consensus, I would consider taking a stab at swapping the engines and doing a pull request as I am becoming more and more familiar with the lucee code. In my mind, the main reason for the swap would be more features / flexibility with regexes and perhaps a speed improvement if there is a significant one to be had.

Given that modern Java has a built-in java.util.regex which seems to have been built as a replacement for ORO anyway, wouldn’t it make sense to use it and lose a dependency along the way?

Simply changing the Regex engine is probably a no-go since that would have the potential of breaking legacy code.

But it is probably possible to add a “switch” that will allow to choose which Regex engine you want to use.

I understand not changing the regex engine for current reXXX functions and tags. What we could do is introduce new functions or a switch like this:

Where regexEngine is a new argument. This is inline with how the crypto functions work. It allows us to migrate from old tech to new tech for those who care. I think the supported engine should be java since that would be directly available and does not add any new dependencies.

Totally agree with your thoughts here, though regex has a lot of standardization. The biggest issue in my mind would be a new feature in an engine that implements the POSIX standard regex more thoroughly might require older code to have more escapes in certain instances, while over 95% of regexes would likely just work.

A setting in lucee admin is certainly reasonable to set the default at least. For something like regex I wouldn’t necessarily want to encourage switching engines in one-off instances with an argument, but that might just be necessary if the hit rate for problems is high.

You could create a test build which runs both engines and record any differences to help develop a migration guide?

@bennadel blogged about this over the weekend 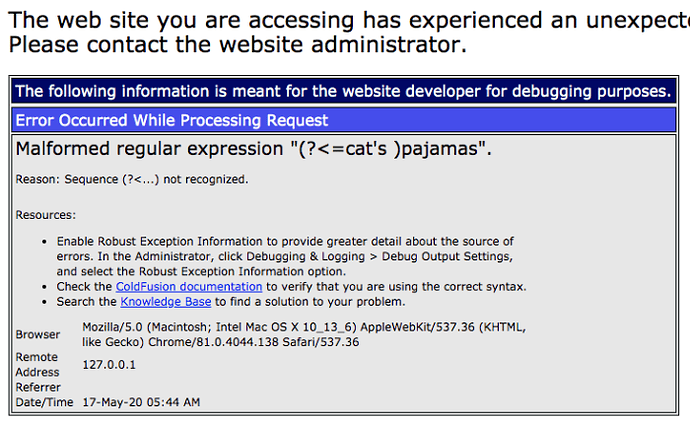 Ben Nadel looks at the ColdFusion Application setting, useJavaAsRegexEngine, which allows the Adobe ColdFusion 2018 (Update 5) runtime to use the Java RegEx engine, instead of the POSIX RegEx engine, for all of its built-in re-Functions.

I have filed a new bug regarding this

I’m not sure why ACF keep adding Application flags – seems like a hot mess to me.

Where regexEngine is a new argument. This is inline with how the crypto functions work. It allows us to migrate from old tech to new tech for those who care. I think the supported engine should be java since that would be directly available and does not add any new dependencies.

This is an approach I could certainly get behind.