I have recently been scoping all the variables in my hobby project; although, I am unsure what scope cfquery tag names fall into. would it be variables?

inside a function, you could just use the local scope, i.e local.myquery

While optimizing a client’s application today, I noticed something interesting that I wanted to share with you. The client’s application is running on FW/1, so the examples here relate directly to that framework, but the conclusions and techniques apply to any application or code base. A common issue with CFML code performance arises from Scope Cascading. Scope cascading is the CFML “feature” that allows you to refer to variables in one of several scopes without explicitly scoping them. For ex…

Using your performance analyzer plugin this week, I noticed that Lucee 5.3.6 is looking for (and finding) my queries in the variables scope, even though I name them as so:

I don’t use a cfset before the query to declare the name and scope, though. Should I?

are you in a .cfm or a function?

Interestingly, I don’t see any entries when the (inherited, antique…) code has this before a cfquery:

But, the performance wastage of queryNew is distasteful to me to adopt it widely.

we are seriously considering disabling this behaviour by default for Lucee 6.0 with an application setting to renable it

Wait, I am confused. Is @mgatto saying that var'ing the query name inside of the cfc method is NOT enough and Lucee is placing it in the variables scope anyway? However, setting the var query name to a blank, new query via queryNew("") first, fixes the issue?

And is @Zackster saying that is correct, albeit unfortunate, behavior because of backward compat?

Actually, we do have an actual file called base.cfc. Is this an “uh oh” moment for me?

Can you show the full code of the query in that CFC? Also, do a simple and quick test.

And see where the query lives.

The original query, whose pattern many of ours currently follow:

In a test.cfm, the query is in the local scope: 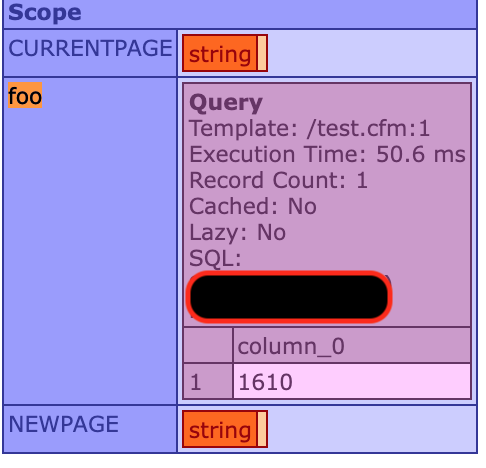 and in the variables scope was this (seems like qry result meta stuff?):

I performed the same test with a fresh CFC and got the same results.

I think that may be working as designed. i.e. your actual query result of local scoped, but the metadata about the query still went into variables.cfquery. If you’re not using that, you probably don’t care. If you want to change the metadata as well, use the results attribute of cfquery.

I’m not concerned about the meta ending up in the variables scope. I’m trying to decide if that’s a false positive logged in Lucee’s debug log for var scoping problems. Basically, can I tell my organization, “yup, we’ve cleared out var scoping errors in this codebase” while we still see these cfquery found in variables log entries?

Well, it’s not a “false positive” in the sense that it really is a variable being put in the variables scope. But it’s variable that it sounds like you’re not using so there’s really on harm to it. If you want to get those lines out of your report, then use the results attribute to cfquery put the meta in a local var.